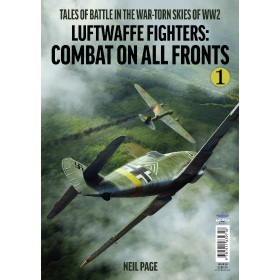 Contrary to the myth, the Luftwaffe of the Second World War was not a 'mighty force' created from scratch virtually overnight. For the most part German fighter pilots were hopelessly outnumbered. Indeed the Jagdwaffe - the fighter arm - never numbered more than 1500 serviceable single seat fighters. By mid-1944 its major opponents could easily field five times that number. As with much of the German war effort, the surprising thing is not that the Luftwaffe fighter arm failed but that it performed as well as it did for as long as it did.This publication takes a slightly different angle on the Luftwaffe 'ace' pilots and their aircraft from the traditional approach of trumpeting their triumphs and hailing their 'kill' tallies. Including many newly translated personal accounts, it details the individual experiences of some less well known Luftwaffe pilots, Gruppen and Geschwader.