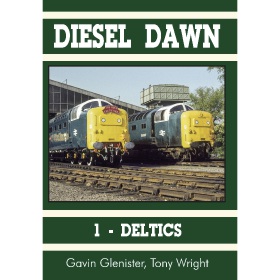 First in a series to record in colour and black and white the prototype origins and production lives of our diesel classes, from halting beginnings in the 1950s to (sometimes) premature ends.

DELTIC itself was the most extraordinary prototype of all; culmination of a long and complex road stretching back would you believe through a First World War German aero engine, Second World War RAF ground attack aircraft, Kreigsmarine E-boats and HM Royal Navy. The English Electric project (known as DP1 - Diesel Prototype No.1, which is how we got DP2 years later) to build DELTIC was speculative, an unusual but not unknown road to take in locomotive history. DELTIC itself, at 3,300hp, was way, way beyond other main line diesels; it duly burst upon the scene, to dramatic effect and in power and speed swept all before it.

BR’s existing diesel electric Type 4s were lumbering giants in comparison. The production fleet that followed, D9000-D9021, made for a glorious couple of decades on the Anglo-Scottish workings of the East Coast. This mighty fleet of 22 Deltics brought electrification levels of performance; that, after all, was their raison d’être, to provide a level of service equal to electric locomotives and this they did - their performances were literally ‘electrifying’! Indeed, outside the peak services they were necessarily somewhat under-utilised - they were almost too powerful for the job.

The coming of the Deltics was a landmark in BR’s Great Modernisation; with their advent ‘...the first major breakthrough in speed, frequency, locomotive and coaching stock utilisation in line with the aims and objectives of BR’s Modernisation Plan was achieved.’ In terms of 1960s modernisation highlights, little compared to the inauguration of the Deltics.