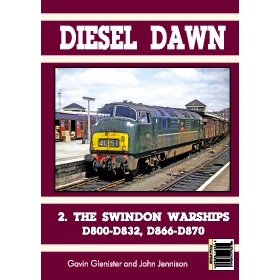 Second in a series to record in colour and black and white the prototype origins and production lives of the first British Railways diesel locomotives, from halting beginnings in the 1950s to (sometimes) premature ends. The introductory pages cover the conception, design and construction in the 1950s and are necessarily in black and white. The remainder of the volume illustrates the locomotives throughout their subsequent working lives through to the 1970s, in colour. Comprehensive text, extensive captions, technical data, life histories throughout.

None of the many 'Diesel Dawns' of our times has been investigated, evaluated, celebrated, excoriated, praised and derided, more comprehensively in (often) more partisan ways, than that of the Western Region diesel hydraulics. The startling first impression these Swindon Warships made when they burst upon a steam-dominated railway in 1958 can hardly be exaggerated. Powerful, fast and above all lightweight, THIS was the Type 4 that the Western Region had wanted and fought so hard to get. Sparkling clean, in an elegant livery with stirring red and silver nameplates, they were glamorous, mysterious even, with that striking sloping front and subtle curves, unhindered by design clutter.