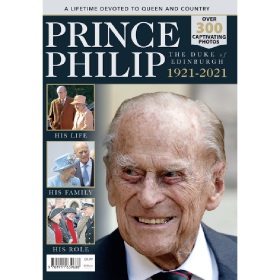 Although he had stepped back from public life in recent years, he continued to be an essential component of the monarchy throughout his life.This special publication commemorates the Duke’s incredible and unprecedented life, paying tribute to his unstinting work and looking back at his courtship of the teenage Princess Elizabeth, their magical wedding that heartened a nation recovering from  the dark days of war and his role as her consort for more than seven decades.