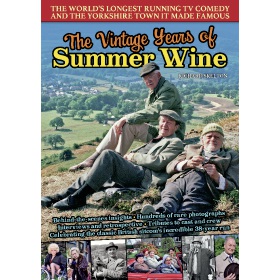 Last of the Summer Wine is the world’s longest-running TV sitcom and has touched the hearts of many millions of people.

Beginning as a one-off show broadcast in early January 1973, it grew into a series of 295 episodes produced over an unrivalled 38-year period.

The comedy regularly attracted audiences of 12 million in the UK during the 1980s and 1990s with Christmas specials doing even better. Sir Terry Wogan was a fan and it was reportedly the Queen’s favourite programme. Last of the Summer Wine has also proved immensely and enduringly popular in many English-speaking countries around the world, with repeats being shown regularly even today in Australia, New Zealand, Canada and the US. The Vintage Years of Summer Wine is a celebration of this phenomenal show, its unique setting of Holmfirth in West Yorkshire and the people who made it such an enduring success.