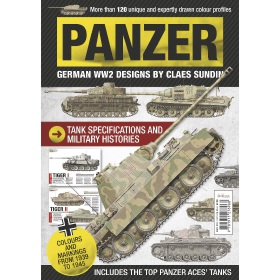 The stunning success of Adolf Hitler’s ground offensives during the first year of the Second World War was due in no small part to the new tanks fielded by his armies. The Panzer III and IV were well-armed, relatively fast and equipped to work closely with motorised infantry. However, when Germany’s armies invaded the Soviet Union they were shocked to encounter the revolutionary T-34 with its long-barrelled gun and sloped armour. Early battles against this machine sparked an arms race that would result in some of the Second World War’s most powerful armoured fighting vehicles - the Tiger I, Panther and Tiger II. Also entering the fray were deadly tank destroyers such as the Jagdpanther, the StuG III and the monstrous Jagdtiger. All these vehicles and more are depicted in glorious detail by legendary profiles artist Claes Sundin in Panzer: German WW2 Designs.