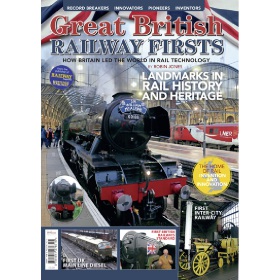 The invention of the world’s first self-propelled railway locomotive in the form of Cornishman Richard Trevithick’s steam engine proved to be a seminal moment in world history, as the concept not only revolutionised public transport but shrank the globe.

This special publication looks at the way in which Britain led society into the modern world with the biggest innovations in transport since the invention of the wheel.

We also look at ‘firsts’ on the country’s own network - the first Pacific and the first main line diesel, areas in which it was our turn to learn from others - and the first British Railways Standard locomotive.

The first heritage railway began operating in the US, one that was newly laid on a green field site. But it was Britain - first and foremost in inventing railways - that started and developed the concept of preserving historic lines, locomotives and rolling stock, which accounts for a sizeable proportion of the nation’s tourist market today, part of our country’s proud and popular historical legacies.