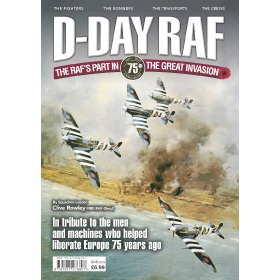 
D-Day RAF - The RAF's Part in the Great Invasion

It was the largest seaborne invasion in military history but D-Day could not have happened without the Royal Air Force.

When the dramatic events of June 6, 1944, are retold the courage of British and Commonwealth pilots and aircrew is seldom mentioned - yet the dangerous missions they flew were vital to Operation Overlord’s success.

The author recounts stories of quiet bravery and individual heroism high above the blood-soaked beaches and landing grounds of France, illustrated through a combination of rare period photographs and beautiful aviation art.

D-Day RAF: The RAF’s Part in the Great Invasion presents the very human face of the air force's role in the Normandy landings, and looks in detail at the types flown in support of them, from Supermarine Spitfire fighters and Hawker Typhoon fighter-bombers to A-20 Boston and Avro Lancaster bombers.