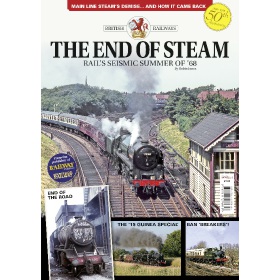 Bookazine - The End of Steam - Book

The End of Steam

This special publication not only covers in detail the final few months of British Rail steam on the main line in 1968, leading up to the ‘last’ train of all, the ‘Fifteen Guinea special’ of August 11, 1968, but much, much more.

For British Rail steam did not end there: steam cranes were used on the national network for many years afterwards, and British Rail kept one last line in steam until it sold it off in 1986 - the Vale of Rheidol Railway. A chapter also looks at the occasions on which the post-August 1968 steam ban was broken!