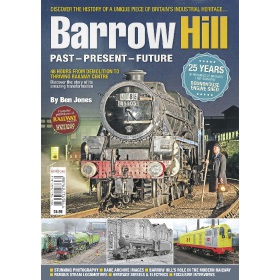 A first in-depth look at Britain's only operational roundhouse engine shed - a unique survivor that is not just preserving the past, but playing a significant role in the operation of the modern day railway. Using the museum archive's superb collection of previously unpublished images and artefacts, we'll look at how this former Midland Railway depot served local industries between 1865 and 1990, how it fell into disrepair and was rescued from demolition by local volunteers and its remarkable renaissance over the last 20 years. Since 1997, hundreds of steam, diesel and electric locomotives of dozens of different classes have visited the museum, and we'll bring you stunning images of famous locomotives in the uniquely atmospheric surroundings of the roundhouse, major events and previously unpublished glimpses behind the scenes.

But it's not just about preservation; a major part of Barrow Hill's success has been in attracting main line operators to use the depot for maintenance, overhauls and servicing. We'll look at the role played by Barrow Hill in maintaining all kinds of rail vehicles, including the prestigious VSOE Pullman train, restoration of classic trains such as the 'Brighton Belle' and heavy overhauls on ex-BR locomotives to return them to front-line service. We'll also show you how the Roundhouse has become much more than a railway preservation site, playing an important role in the local community, hosting major events such as the now-legendary 'Rail Ale' festival, becoming a unique venue for concerts and plays and filming. We'll also look to the future and how a major Heritage Lottery Fund grant will transform the roundhouse from 2017 and talk to the people who helped to save this remarkable place and make it so successful.