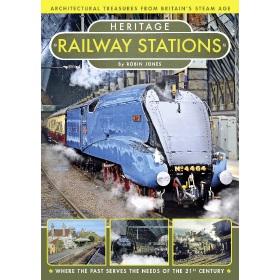 Britain’s railway stations big and small in architectural terms rank high among the country’s finest national treasures, and many of them are a delight to behold.

Yet we did not always see it that way. Half a century ago, when the steam age was breathing its last, so many wonderful Victorian and Edwardian structures were swept away in the name of progress.

However, thanks to both the heritage railway sector and conservationists, today we take a far more enlightened view. Rather than wipe away the past in the name of progress, we have learned to combine the best of the ancient and modern when upgrading our stations to serve the transport needs of the 21st century.

This volume celebrates the many successes that have been achieved both with the enlightened ‘heritage first’ policy at main line station renewals, and dazzling achievements accomplished on preserved lines.