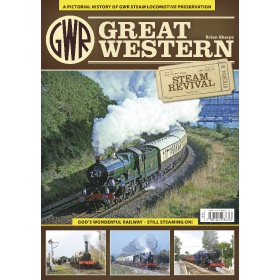 
Brunswick green locomotives, with polished brass and copper, hauling chocolate and cream coaches on holiday expresses including the ‘Cornish Riviera Express’; Paddington, Bristol Temple Meads, Swindon works, Box tunnel, the Devon banks, pannier tanks, auto trains, slip coaches, the Severn Tunnel; this is what we associate with perhaps the most distinctive of Britain’s ‘Big Four’ railway companies in the 1923-48 period.

Uniquely among the ‘Big Four’, the Great Western retained its name after the 1923 Grouping, and little changed except that the company grew rather bigger with the inclusion of many independent lines, mostly in the South Wales valleys. A total of 161 GWR steam engines survive in preservation, the number swelled dramatically by many rescued from Barry scrapyard, although many of these remain unrestored, and many probably never will be.

The total number of engines surviving is a movable feast as new engines are being built, but sometimes at the expense of others which are being dismantled for spares, and to all intents and purposes must now be considered as scrapped. However, some ‘scrapped’ engines have seen remarkable revivals. The Great Western steam revival is a fascinating saga; this is the story of those 161 engines, and of the people who restored, maintain and operate them.