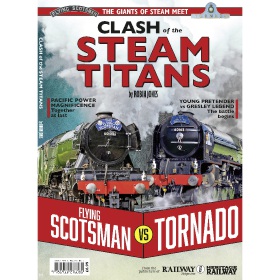 Bookazine - Clash of the Steam Titans

What happens when the most famous locomotive of the 20th century meets its 21st-century equivalent? A clash of steam titans!

Flying Scotsman, the first steam engine in the world to officially break the 100mph barrier, returned to steam in January 2016 after a £4.5 million restoration, to an ecstatic welcome by the British public.

Tornado, the first steam locomotive built for the UK main line in half a century, has also been wowing the crowds all over the national network after returning from a major overhaul.

The pair have turned in a series of dazzling performances during 2016, and finally met up at the Severn Valley Railway’s late September 2016 Pacific Power event, which was attended by a record 45,000 people.

Clash of the Steam Titans looks in brief at the history of each and their crowd-pulling exploits this year, and then asks - which is now the most famous of them all?