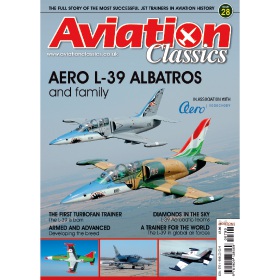 
We are delighted to have to opportunity to tell the full story of a remarkable aircraft, the world’s first turbofan powered training aircraft and the most successful military jet trainer of all time in terms of numbers of customers.Designed by the Aero Vodochody team under chief designer Jan Vlcek, the prototype Aero L-39, actually the second aircraft built, first flew on November 4, 1969. Full scale production began in 1971 to equip the air forces of the Warsaw Pact and their allies as the standard basic and advanced jet trainer with a secondary role as a light ground-attack aircraft.

The longevity of the L-39 in service is down to two factors, the first is the typically rugged and reliable Aero design, the tough airframe being able to absorb the rough handling of student pilots and being flown to a stress limit of +8 and -4G.  Secondly, the L-39 is one of the most cost effective jet trainers ever built, its basic and operating costs being both attractive and affordable to air forces with a limited budget. At the same time as being affordable, the L-39 is a very high performance aircraft and is still fully supported by Aero with a range of modifications and upgrades.

The trainer was to be used in combat by six of its customer nations, and we tell the full story of the operational career of this lithe and agile aircraft. With the end of the Cold War, the relative low cost of the Aero trainers made them very attractive on the civil market for private owners in a variety of roles, such as air racing, formation display teams, experience flying and as private aircraft. Currently, five countries have private L-39s on their registers, the largest customer being the US with over 255 flying today. The L-39 was developed into the L-59 and L-159 and most recently the L-39NG was announced in 2014, an extensive redesign of the original trainer concept with greater internal fuel, modern avionics and a Williams FJ44 turbofan.