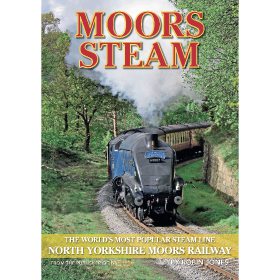 Moors Steam has been written by Heritage Railway magazine editor, .

This comprehensive 132 page full colour, perfect bound ‘bookazine’ is the story of the North Yorkshire Moors Railway, a pinnacle of the rail preservation movement.

The book tells the story of how the line began in 1836 as Rocket inventor George Stephenson’s Whitby & Pickering Railway, when he reverted the line to horses to pull the trains, its conversion to a steam railway, its years under the London & North Eastern Railway and British Railways before its closure by Dr Beeching – with the accompanying protests.

It was then saved by volunteers and reopened step by step. Eventually, services were extended, in a groundbreaking move, back over the main line to Whitby – where a new terminus is being opened in 2014. The line regularly receives upwards of 350,000 visitors a year from across the UK, and indeed the world.

The North Yorkshire Moors Railway is now by far the most popular steam railway in Britain and probably the world, not only because of its stunning moorland scenery and magnificent main locomotive fleet, but also because it featured in the prime time ITV 1960s police drama Heartbeat for 18 years, fans of which are still drawn to what is already a tourism hotspot today.

This publication also features the story of its locomotives, the flagship being A4 streamlined Pacific No. 60007 Sir Nigel Gresley , which featured in the phenomenally-successful Mallard 75 celebrations in 2013-14, and which is the British post-war steam speed record holder.

As well as being lavishly illustrated with stunning pictures of steam running through the moors in all seasons, the book will offer advice of where to take the best photographs.