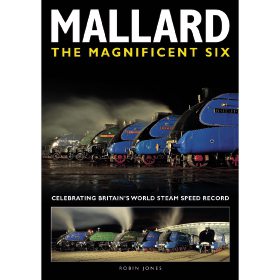 This bookazine following on from the bestselling Mallard 75, and chronicles a year of spectacular celebrations marking the 75th anniversary of LNER Gresley A4 streamlined Pacific No. 4468 Mallard’s 126mph world steam speed record, and featuring Dwight D. Eisenhower and Dominion of Canada, the two members of the class specially repatriated from North America for the purpose.

Starting with Prince Charles’ visit to see Mallard at the National Railway Museum on the day his grandson was born, the bookazine looks at sister engine Bittern’s heritage era record-breaking trips on the main line, the Autumn Great Gathering at the National Railway Museum, which brought the total of visitors to the two A4 line-ups there to nearly a quarter of a million, Mallard’s celebratory last summer tour, the Pacific line-ups at Barrow Hill roundhouse and the Great Goodbye line-up at the Locomotion museum in Shildon, which attracted 120,000 visitors in late February 2014.

In addition, the volume looks at the ‘Sons of Mallard’ - the Southern Railway Pacifics designed by Gresley’s former assistant Oliver Bulleid, who had worked with him on the A4s, the rebirth of the great ‘cathedral of steam’ King’s Cross, the electric record breakers which followed in the footsteps of Mallard and plans to build a new Gresley masterpiece which have been physically started by TV presenter James May.