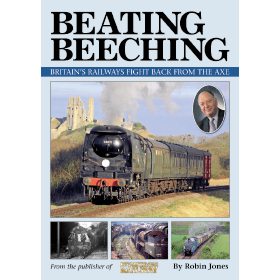 Beating Beeching: Britian's Railways Fight Back from the Axe by Robin Jones (Bookazine)


The 50th anniversary of the famous report by British Railways chairman Dr Richard Beeching which announced the closure of thousands of miles of lossmaking branch lines and cross-country routes has seen many books appear highlighting the public opposition and the mistakes that were made.

This one, however, documents the way back for railway lines that were earmarked for closure by the axeman, who has been described as ’s most hated civil servant of all time.

Had the recommendations in Beeching’s report The Reshaping of British Railways been followed to the letter, the ’s national railway network would have been more drastically reduced.

However, many lines were saved or reopened, by a combination of public and political pressure, by local authorities wanting to reduce traffic congestion, or by ordinary people who were not prepared to stand by and watch it happen.

Beating Beeching looks at the wide spectrum of ways in which railway lines closed before, during and after the Beeching era have been given a new lease of life.

Read about - the civil servant who plotted within the corridors of power at to stop a major cross-country route through the heart of from being axed.

How an eagled-eyed local weekly newspaper accountant broke an embargo on an advertisement – and saved a line which went on to become a strategic and extremely busy commuter route in the years that followed.

The story of how a massive public campaign to save ’s most beautiful railway – the Settle and line – succeeded – with more than a little inside help from one of British Rail’s own managers.

The reopening of a network of lines to regenerate the coalfield after the closure of the deep coal pits.

The conversion of axed lines into major tourist attractions essential to many a local economy by railway preservations.

The railways that were saved because they ran through marginal parliamentary constituencies.

The book also looks at future plans to reopen more lines, in a world increasingly dogged by road traffic gridlock, and the arguments both for and against the building of HS2.

The book is lavishly illustrated by pictures both from the steam era and the modern day.