Home / / The Encyclopeadia of Titled Trains by Nick Pigott (Bookazine) 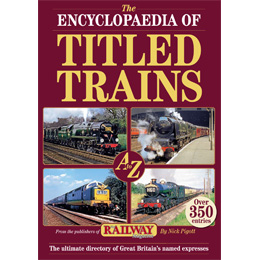 The Encyclopeadia of Titled Trains by Nick Pigott (Bookazine)

The Encyclopaedia of Titled Trains

Written and compiled by The Railway Magazine editor, Nick Pigott - 'The Encyclopaedia of Titled Trains' is the first comprehensive publication to include all 350 or so British named expresses from the 1840s to the present day. Today, one train can look very much like another to the untutored eye, but there was a time when many crack expresses had their own individuality and rolling stock. Such trains bore proud names such as the ‘Golden Arrow’, the ‘Royal Scot’ and the ‘Heart of Midlothian’.

This book, which is set out in alphabetical order, takes its reader back to the golden age of titled trains in Great Britain and includes potted histories of each one. There has been a crying need for a comprehensive all-encompassing book on this subject for a long time and this publication will fill that gap. The encyclopaedia also features the famous Pullman trains, which brought glamour and opulence to the nation’s railways.

The Encyclopaedia of Titled Trains  By Nick Pigott