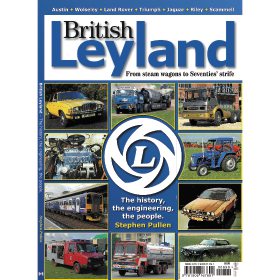 During the 1960s vehicle makers all over the world were looking to expand and amalgamate as at the time it was considered the only way they could survive. As a major manufacturing nation Britain at the time had a large number of makers of all kinds of vehicles and gradually many of them joined together to form two large companies. The first of these was the Leyland Motor Corporation which was principally involved with the manufacture of commercial vehicles although they had also recently diversified into cars. The other major concern was British Motor Holdings, owners of some of Britain's iconic car makes including Austin, Morris, Wolseley and Riley to name but a few. With size meaning strength, and with government encouragement, these two companies merged in 1968 to form the British Leyland Motor Corporation, one of the largest vehicle making firms in the world. Written by Heritage Commercials editor, Stephen Pullen, this publication looks at the histories of many of the companies that found themselves in this massive organisation, together with some of the products that they produced, the problems they faced and what happened to them in the end. Makes covered include Jaguar, Vanden Plas, Rover, Triumph, Mini, Alvis, AEC, Albion, Scammell etc, while it also looks at some of BL's more unusual products including gas turbines, miltary tanks, trains and fridges. British Leyland- From Steam Wagons to Seventies StrifeBy Stephen Pullen