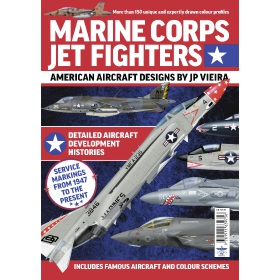 The United States Marine Corps has a proud history of flying fast, well-equipped and powerful jet fighters in support of its troops on the ground. Having started out with McDonnell’s basic FH-1 Phantom, the Marines soon received much more capable jets. The F2H Banshee, a scaled up Phantom, become a great recon platform while the North American Fury series provided high-speed anti-air performance.Grumman’s exceptional F9F Panther became the ubiquitous attack aircraft of the Korean War and its capabilities were expanded as the swept-wing F9F Cougar. Marine Douglas F3D Skyknights scored the first radar-only jet-on-jet night kills and the fast-climbing F4D Skyray gave the Marines a true jet interceptor.Vought’s F-8 Crusader was the USMC’s first true multirole fighter and together with the outstanding McDonnell Douglas F-4 Phantom would provide close air support for Marine Corps forces during the Vietnam War.The AV-8A Harrier enabled Marine Aviation to operate a tactical jet fighter without runways or carriers and that capability continues today with the AV-8B Harrier II and now the Lockheed Martin F-35B Lightning II. The McDonnell Douglas F/A-18 Hornet is the Marines’ fast jet all-rounder with the F-35C now entering service to replace it.Marine Corps Jet Fighters offers a fully illustrated history of these incredible aircraft with more than 150 highly detailed artworks by renowned aviation illustrator JP Vieira.