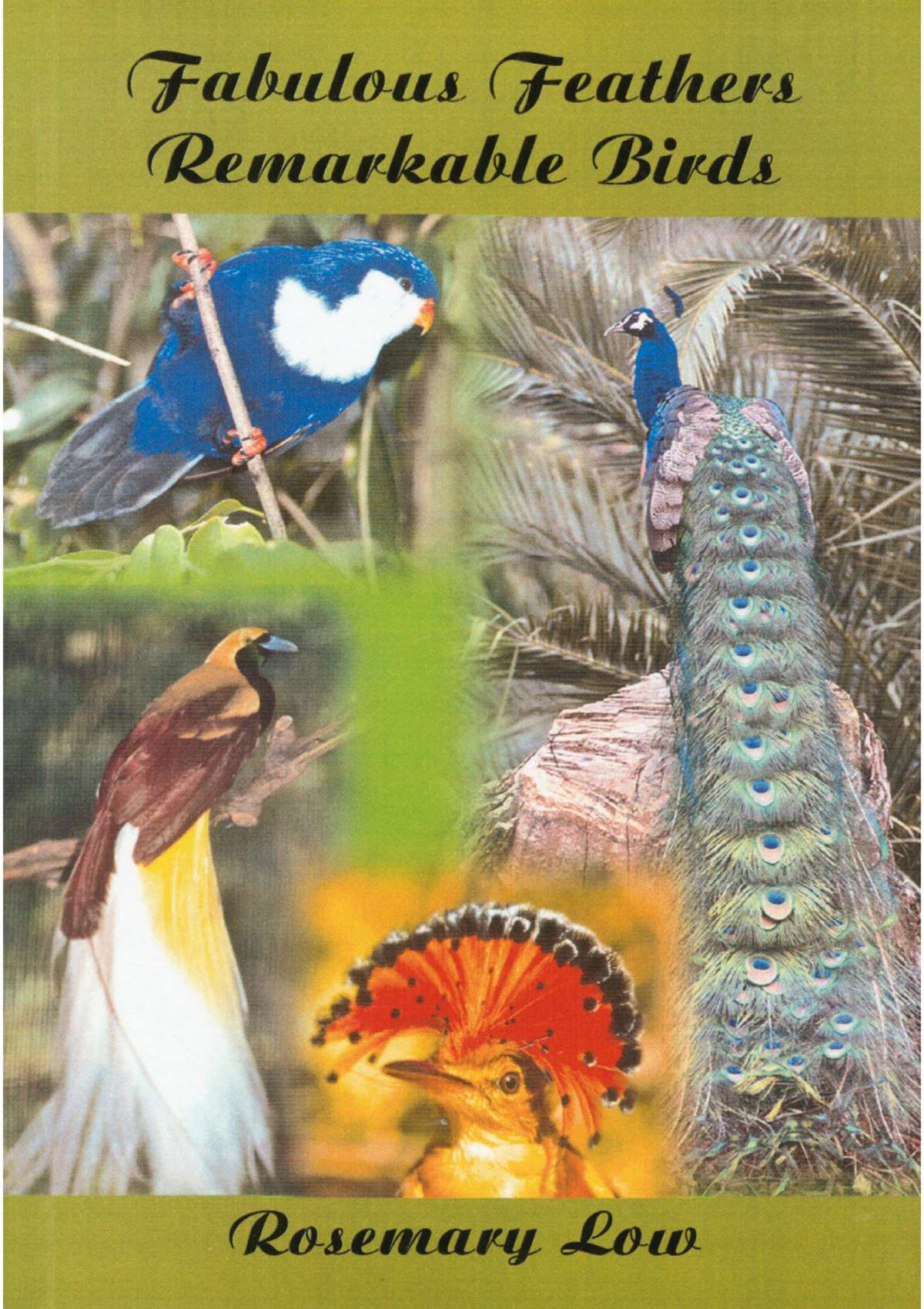 In "Fabulous Feathers, Remarkable Birds" Rosemary Low aims to instil an appreciation of birds into her readers, at the same time making them aware of the serious and escalating threats to bird survival. She recounts how these denizens of our skies inspire devotion in millions of people worldwide. Through the ages they have played an important role in the life of man. Now they need our help. Spiralling human populations have had serious consequences for 12% or more of the world's birds. They are at risk of extinction within this century. Two hundred are already on the brink and soon more will fall within this sad category. Rosemary Low explains why, taking us to many corners of the earth to give examples. From the flightless, nocturnal, endearing Kakapo (a giant parrot) of New Zealand, to the snow-white Bali Mynah, for which the last-ditch captive breeding attempt was foiled in an armed robbery, to the near-extinction of North America's Brown Pelican due to DDT, she recounts their fascinating and often inspirational stories. And those of the human players in the dramas of their saving or of their extinction. In Part 1 of this book she describes their attributes. The extraordinary plumage of many species, such as fluorescent and iridescent feathers, extravagant headdresses and brilliant colours, and the incredible displays of the birds of paradise have long captured human imagination. In contrast are the bizarre and the remarkable: the Shoebill with its outsize beak and the Umbrella bird with its beatle crest and long feathered wattle. A chapter is devoted to unusual stories of strength and endurance in the face of almost insurmountable hardships, including the pigeons that won medals during the second world war. The love lives of birds, and even devotion to a partner that survives after death, are the subject of another chapter. Seldom-considered aspects, such as memory, intelligence, and a degree of awareness that we might associate only with humans, are revealed. Birds are not automatons, programmed to act in a certain way. They are sometimes remarkably like us. The birds' struggle for survival is related in Part 2. Strategies and adaptations include snail-eating kites and nut-eating vultures and crows that use tools to obtain food. Throughout Europe and the USA familiar species are in decline, due to harmful agricultural practices, loss of habitat and road kills. In the tropics deforestation has had catastrophic consequences for countless species. Island birds are especially vulnerable, such as Madagascar's probably recently extinct Pochard duck. Some unique endemic species are on the brink of extinction. Introduced predators, including rats and stoats, have taken an enormous toll, and one cat single-handedly wiped out an entire species (a tiny wren). The actions and strategies of those people who have played a significant part in saving birds are related in Part 3. One man reversed the plight of New Zealand's Black Robin when only one female was left alive. A theme of optimism runs through the chapter on believed extinct species that have been "rediscovered", and species new to science recently described. In rare cases captive breeding is the only option in saving a species; the arguments for and against are presented. Some of the world's most spectacular birds of prey, flagship species for conservation, are the subjects of ongoing projects, such as the regal Harpy Eagle. Two species, the California Condor and the Mauritius Kestrel, have been saved by captive breeding, and Europe's Bearded Vulture has been reintroduced in several European countries. The final chapter asks what the future will hold for the birds of the world. Much will depend on human population control, conservation education programmes and a more thoughtful approach to assisting bird survival. A worldwide and major change in attitude towards the environment and the world's resources will be essential if mass extinctions are to be averted.