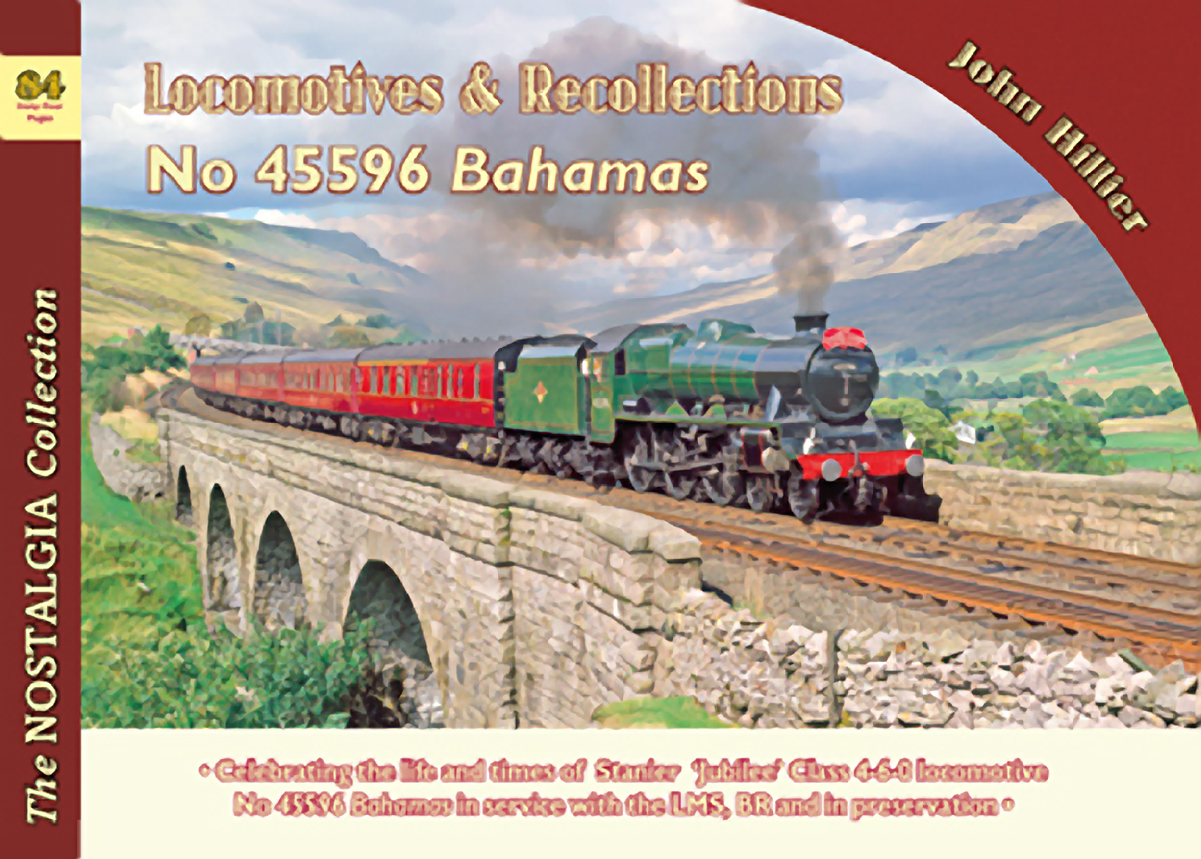 The first title in this new Recollections theme looking at preserved locomotives LMS engine No.5596 was constructed at the Queen's Park works of the North British Locomotive Co in Glasgow toward the end of 1934. As one of the 191 examples of the 'Jubilee' class, the engine entered traffic with the LMS railway in January 1935 and was allocated to Crewe. It was named Bahamas during its first service repair in June 1936. It subsequently operated from Preston, Camden, Willesden, Kentish Town and Derby prior to the outbreak of the Second World War. Indeed, its highest annual mileage was during 1939 when it achieved in excess of 72,000 miles during that year During the war Bahamas worked from Grimesthorpe, Millhouses and Bristol. It was back at Crewe by 1947 and, as BR No.45596, would see operation from Edge Hill and Carlisle, before withdrawn from service at Stockport's Edgeley shed in 1966.The engine, the first of the Jubilees to be saved, was purchased in 1967 and sent to the Hunslet Engine Co. in Leeds for repair and a repaint into its former LMS livery. The engine, now operational, provided footplate rides for visitors to the Dinting Railway Centre. During 1972 it was chosen by BR to be amongst the first group of steam locomotives to work on designated routes over the national rail network, following a 'Return to Steam' campaign by locomotive owners. Boiler repairs became necessary during 1973 and Bahamas was taken out of service to become a static exhibit at the Society's home at the Dinting Railway Centre. Work on the restoration of other locomotives by Society volunteers prevented a start on the overhaul of Bahamas until 1980.Restored to its authentic British Railways condition, Bahamas successfully operated numerous railtours on the main line between 1989 and 1994, covering more than 12,000 miles before its main-line certificate became due for renewal. It was praised by both enthusiasts and professional railwaymen, and earned itself an enviable reputation for excellent reliability and good performance.Then followed visits to various heritage railways until the expiry of its boiler certificate in 1997 resulted in its withdrawal from operation.The engine then went on public display in the museum of the Keighley & Worth Valley Railway at Oxenhope, where it stayed until 2012 when it was invited to attend the 'Railfest' event at the National Railway Museum in York. Its stay at York was extended until the following year, when it returned to Ingrow which by then was the new operational base for the Bahamas Locomotive Society..It was during 2012 that an application was made to the Heritage Lottery Fund to enable the overhaul of Bahamas to be undertaken by contractors and thus speed the process of its return to working order. The bid was successful, and the engine returned to steam for the first time in September 2018. Some of the work was undertaken by Society volunteers although most of the heavy engineering was undertaken by Tyseley Locomotive Works.This new title in the Recollections series is being published as part of the celebration of No 45596 Bahamas return to the main line and heritage railways during 2019 and beyond.