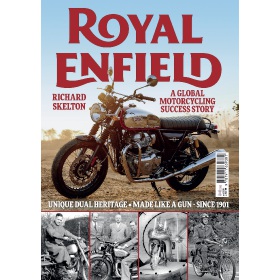 Royal Enfield is at once an historic motorcycle company with a truly unique heritage and a dynamic, modern concern.

Exciting new models are being built in the firm’s high-tech factories in Chennai in southern India and sold in ever increasing numbers around the globe, with more new designs in development. And while its bikes are creating millions of happy motorcyclists around the world, its business philosophy is blazing a trail for other motorcycle manufacturers to follow.

Royal Enfield motorcycles have been in continuous production longer than those of any other make in the world and the brand has a rich and fascinating Anglo-Indian back story. The present-day company is proud of its British motorcycling roots dating back to 1901, and equally proud of its Indian heritage which had its beginnings in the early 1950s.

Packed with fantastic photographs of current models and hundreds of historic images, this is the fascinating story of the marque’s interesting and unusual dual history and a celebration of all things Royal Enfield. As well as being first and foremost about motorcycles and motorcycling, it examines the ethos of the modern day Royal Enfield company in Chennai and tells the human story of the innovative British firm that continues to inform and inspire it.