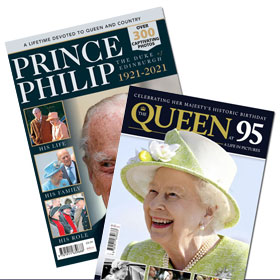 Celebrating Her Majesty's Historic Birthday - A Life in Pictures

Queen Elizabeth II celebrates her 95th birthday in 2021. With an extensive collection of more than 300 fascinating images, The Queen at 95: A Life in Pictures takes readers through the people, the places and the moments that have shaped the life of Britain’s longest-reigning monarch.

Elizabeth Alexandra Mary Windsor, the first child of the Duke and Duchess of York, was born at 17 Bruton Street in Mayfair, London, on April 21, 1926. The monarchy, the nation and the world have changed dramatically since then, yet Elizabeth has remained a beacon of consistency and stability throughout - first as a princess, then as Queen.

Although he had stepped back from public life in recent years, he continued to be an essential component of the monarchy throughout his life.This special publication commemorates the Duke’s incredible and unprecedented life, paying tribute to his unstinting work and looking back athis courtship of the teenage Princess Elizabeth, their magical wedding that heartened a nation recovering from the dark days of war and his role as her consort for more than seven decades.

Hundreds of photographs chronicle the Duke of Edinburgh’s life - from cementing his place at the head of the royal household to becoming a proud parent, grandfather and great-grandfather, while guiding his family through occasionally choppy waters and serving Queen and country through good times and bad.