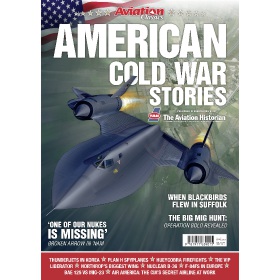 The cold war arms race presented the United States of America with immense political, military and technological challenges. Air superiority in particular was essential for the defence of the Free World against communist expansion and the constant threat of nuclear war. American combat aircraft fought in the skies over Korea and Vietnam, while the CIA’s clandestine operations saw civilian machines pressed into service over Cambodia, Laos and elsewhere. Back in the US, vast sums continued to be spent on designing and building state-of-the-art aircraft. Some would never leave the drawing board and others, such as the gigantic B-35 flying wing and nuclear-powered NB-36H, would remain prototypes. But a handful, including the record-breaking SR-71 Blackbird, would enter service on the front line. Cutting-edge American aircraft and highly skilled airmen flew for freedom around the world in difficult, demanding and sometimes downright deadly circumstances during the tumultuous decades of the ‘war’. Within this volume you will find a collection of real-life stories concerning incidents, accidents, events, decisions, mistakes, oddities, arguments and above all incredible American aircraft from the cold war period. Each of the 15 pieces comes with a guarantee of painstaking research carried out by some of the finest aviation historians working today.