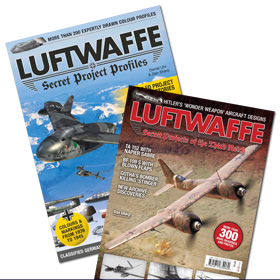 Hundreds of thousands of classified documents were captured from Germany’s aircraft manufacturers and aviation ministry at the end of the Second World War, including details of ‘secret project’ aircraft designs created by firms such as Arado, Gotha, Blohm & Voss, Messerschmitt and Focke-Wulf.

Ongoing new research in archives around the world has revealed dozens of previously unknown wartime plans and proposals for aircraft that were radical, revolutionary or just plain weird. In the sixth volume of his Luftwaffe series, historian Dan Sharp reveals a wealth of new discoveries - including never-before-seen drawings and designs for fighters, bombers, transports, rammers, ground-attack aircraft, flying boats and flying bombs.

Hundreds of original and previously unseen documents have been used to compile this unrivalled look at some of Germany’s least-known Second World War project designs, featuring a host of new and period drawings, illustrations and photographs.

Renowned aviation artist Daniel Uhr has brought the original German construction sketches and three-views to life like never before - offering a whole new perspective on images previously only seen as black and white line drawings.

Accompanying Daniel’s artworks is a full description of the competitions and requirements which produced such a huge number of innovative and unusual designs during the war, as well as descriptions of the designs themselves, written by historian Dan Sharp - author of the acclaimed Luftwaffe: Secret series - and based on the latest historical research.

Offering a host of different colour schemes and detailed notes, this is indispensible reading for enthusiasts and modellers alike.