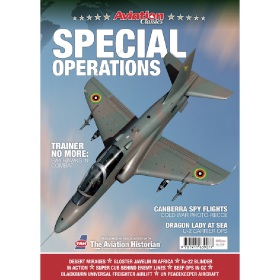 Aviation Classics: Special Operations details some of the most interesting and unusual missions carried out by aircraft and air forces over the last 75 years. The incredible long-range flights in converted bombers that kept lines of communication open between the Allies during wartime are revealed, along with Cold War Canberra spy flights, the remarkable story of Australia’s Air Beef operations and the Pipers that flew behind enemy lines in the Middle East. United Nations-backed combat missions flown by Sweden’s ‘flying barrel’ Saab 29 Tunnan jet fighter in Africa are recounted, as are details of the CIA’s covert Lockheed U-2 flights off aircraft carriers, the Piaggio diamond mine taxi, the Gloster Javelin’s role in the Rhodesian standoff, the BAe Hawk’s ground-attack missions in the Congo, Tu-22 Blinders bombing the French and more.Each of the 14 pieces comes with a guarantee of painstaking research carried out by some of the finest aviation historians working today.