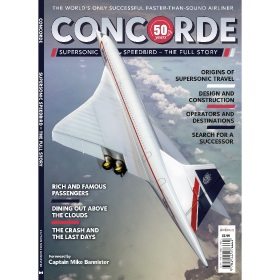 A wonder of innovation and a 20th century icon - Concorde pushed the boundaries of speed, technology and luxury. It made its first flight 50 years ago, in 1969.

The magnificent white bird, travelling at twice the speed of sound between London, Paris and New York, represented the pinnacle of commercial air travel.

When it first took to the skies its systems were the most refined and complex ever seen, its pointed nose, slender fuselage and delta wing gave it the appearance of an arrow aimed at the horizon and it went faster than a rifle bullet. Concorde’s passengers were heads of state, royalty, pop stars, millionaires and those so caught up in the dream of supersonic flight that they were willing to part with the enormous cost of a ticket for the greatest airliner ever made. Concorde: Supersonic Speedbird - The Full Story gives a complete account of this incredible aircraft.